Mohamed Saif - MASc thesis on CJ deflagrations and their DDT

- May 13, 2016
Mohamed Saif just completed his MaSc thesis on the CJ deflagrations and their transition to detonation. Also, check out our Proceedings of the Combustion Institute pre-print paper. 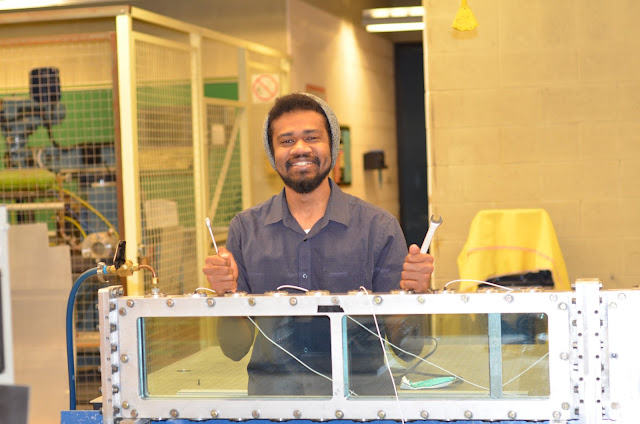 Run-Up Distance From Deflagration to Detonation In Fast Flames

In the process of deflagration-to-detonation transition (DDT) in reactive gases, the flame typically accelerates first to the choked flame condition (known as a Chapman-Jouguet deflagration), where it propagates at the sound speed with respect to the product gases. Subsequently, the choked flame may transit to a detonation. In the present study, the transition length from choked flames to detonations was measured experimentally in laboratory-scale experiments in methane, ethane, ethylene, acetylene, and propane with oxygen as oxidizer. The choked flames were first generated following the quenching of an incident detonation after its interaction with cylindrical obstacles with two different blockage ratios, 75\% and 90\%. Comparison with a recently proposed model confirms that these are Chapman-Jouguet deflagrations. The subsequent acceleration was monitored via large-scale time-resolved shadowgraphy. The mechanism of transition was found to be through the amplification of transverse waves and hot spot ignition from local Mach reflections. The transition length was found to correlate very well with the mixture's sensitivity to temperature and pressure fluctuations. These fluctuations could be connected to a unique parameter (X), introduced by Radulescu. The parameter is the product of the non-dimensional activation energy (Ea/RT) and the ratio of chemical induction to reaction time (ti/tr). Mixtures with a higher X were found to be more prompt to hot spot ignition and amplification of the fast flame into detonations. The run-up distance for unstable mixtures was found to be much shorter than anticipated from a model neglecting the fluctuations in a 1-D framework. The run-up distance was also correlated to the detonation cell size, yielding LDDT ~ 7 - 50 cells, with the proportionality coefficient depending on X and the obstacle blockage ratio. Finally, a unique correlation for the run-up distance is proposed, yielding LDDT ~ 3000 c tr, where c is the sound speed in the shocked non-reacted gas, valid for large X.

---
Here is an example of the detonation transmission across the row of cylinders.  First a shock-CJ deflagration complex is established, which then accelerates back to a CJ detonation. 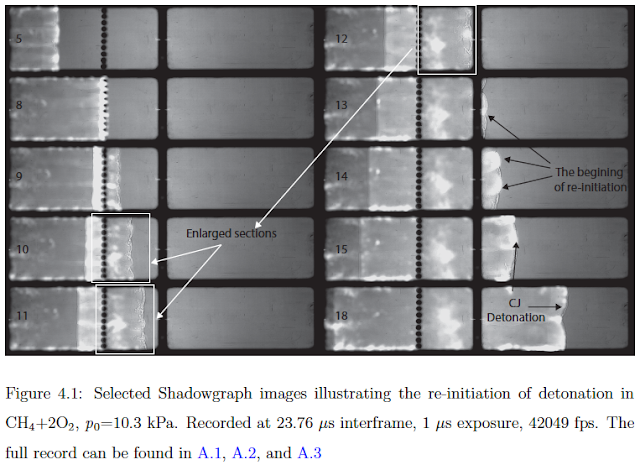 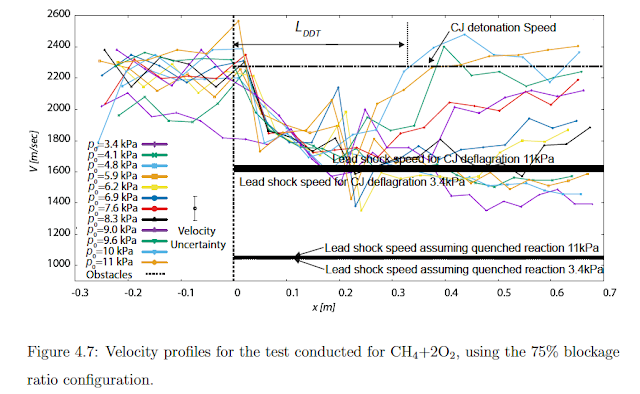 The run-up distance to a detonation was measured for all the fuels tested.  Here it is normalized by the theoretical Run-up-Distance calculated by assuming the lead shock was steady and planar.  As the reaction zone of more unstable and prone to hotspot ignition, the DDT length becomes order of magnitude shorter than anticipated from 1D steady considerations.  The DDT length correlates well with the stability parameter X, denoting the sensitivity of the induction time changes to temperature fluctuations, when compared to the reaction time. 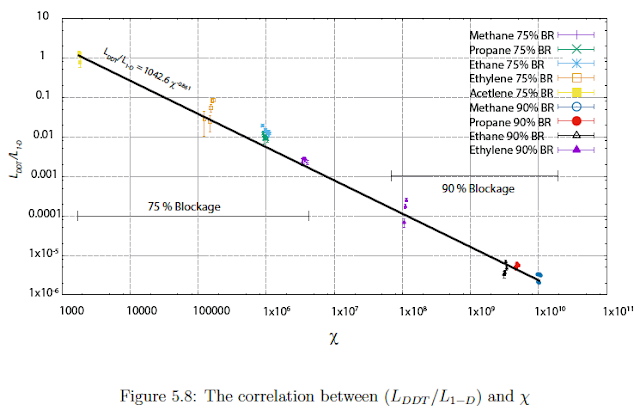 The inverse linear correlation of the previous figure suggests that the induction time behind the lead shock does not control the DDT length.  Instead, only the characteristic reaction time controls the DDT process.