On the mechanism of cellular damage by shock waves: STUDENTS WANTED


Kadeem Dennis has defended his thesis on the mechanism of cellular damage by shock waves, titled "Mechanical Modification of Cells by Pressure Waves and its Application to Traumatic Brain Injury".

The preliminary study addresses the mechanism by which shock waves damage cells and may lead to traumatic brain injury (TBI). Fibroblasts (3T3) cell cultures were exposed to pressure waves produced by reacting thermite powder in water with different pressure amplitudes, ranging from 0.04 to 1.4 MPa peak pressures. Fluorescent images of the cells before and after pressure wave exposure were used to determine the type of damage suffered by the cells and whether the cells have died. 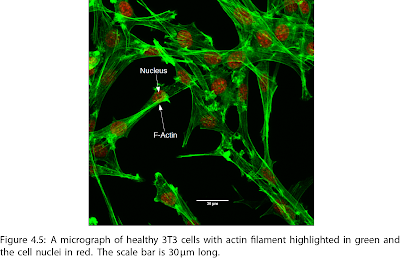 Immediately after the exposure to the pressure waves, the cells were found to have their actin filament de-polymerized for all pressure waves tested. If allowed to recover for 60 minutes the 3T3 cells were found to have their actin re-polymerized. While the link to TBI is not clear, the re-polymerization stage is known to be a period during which the cell ceases its normal functions and must reconstruct its filament. 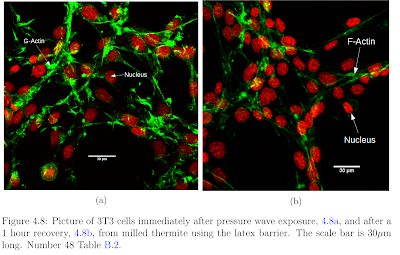 The pressure threshold for cellular death was also addressed by considering the shock thickness that is comparable with the characteristic dimension of cellular components.  Previous studies indicate a threshold for cell death when shock pressures are on the order of 1Mpa, which corresponds to shock thicknesses less than 10 microns, which is comparable to the characteristic nucleus diameter.   This supports the view that cell damage or death may be related to the pressure amplitude of a shock wave corresponding to the loading strain rate being comparable to the inverse of the acoustic wave passage time across the vulnerable components of the cell. 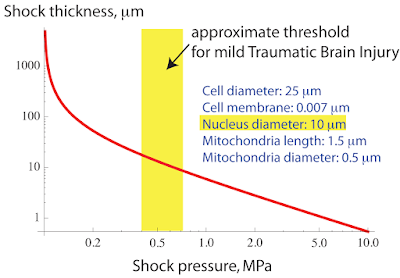 I am looking for highly motivated students to pursue this very exciting area of research.  Contact me.