- June 27, 2014
Geoff Maines was instrumental in our efforts to characterize thermites for use in cellular injury studies.  His work addressed the underwater shock performance of ball-milled activated thermites and the ability to control the pressure pulse amplitude and widths.   He has now graduated with a MASc degree from our group - unfortunately someone else will benefit in the future from his enthusiasm for research, ambition and meticulousness in setting up experiments. 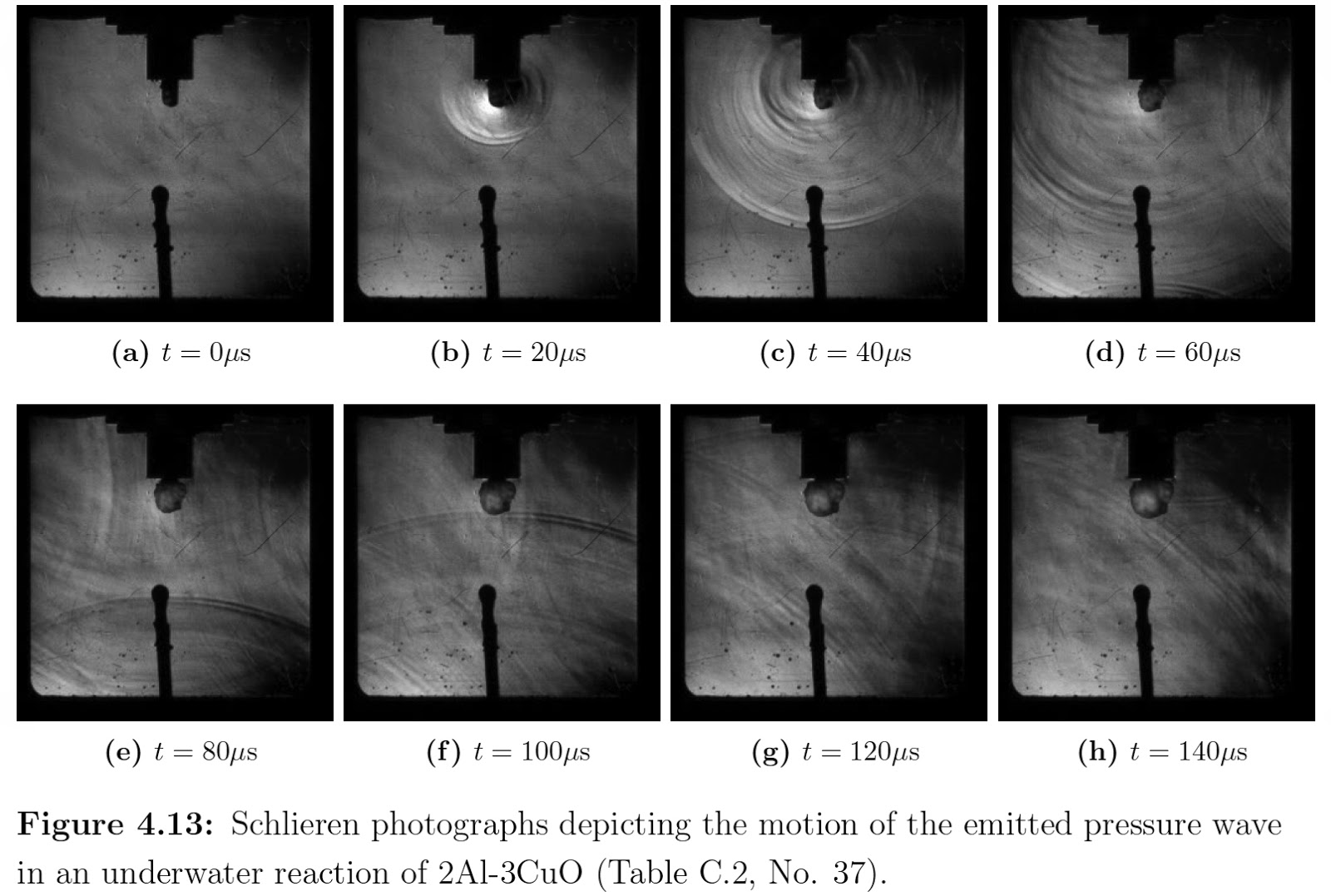 Ongoing work with Kadeem Dennis studies the interaction of these pressure waves with cells.

Recently, the use of thermite-based pressure waves for applications in cellular transfection and drug delivery have shown significant improvements over previous technologies. In the present study, a new technique for producing thermite-generated pressure pulses using fully-dense nano-scale thermite mixtures was evaluated. This was accomplished by evaluation of a stoichiometric mixture of aluminium (Al) and copper(II)-oxide (CuO) prepared by mechanical alloying. Flame propagation speeds, constant-volume pressure characteristics and underwater pressure characteristics of both a micron-scale and mechanically alloyed mixture were measured experimentally and compared with conventional nano-scale thermites. It was determined that mechanically alloyed mixtures are capable of attaining flame propagation speeds on the same order as nano-scale mixtures, with flame speeds reaching as high as approximately 100 m/s. Constant-volume pressure experiments indicated that mechanically alloyed mixtures result in lower pressurization rates compared with conventional nano-scale mixtures, however, an improvement by as much as an order of magnitude was achieved compared with micron-scale mixtures. Thermochemical equilibrium predictions for pressures observed in constant-volume reactions were found to capture relatively well the equilibrium pressure for both low and high values of relative density. Generally, the predictions over-estimated the measured pressures by approximately 60%.

Results from underwater experiments indicated that the mechanically alloyed samples produced peak shock pressures and waveforms similar to those for a nano-scale Al-Bi2O3 mixture reported by Apperson et al. (2008). In an effort to model the pressure signal obtained from the underwater reaction, calculations were performed based on the rate of expansion of the high pressure gas sphere. Predicted pressures were found to agree fairly well in terms of both the peak pressure and pressurization rate.

The present study has thus identified the ability for mechanically alloyed thermite mixtures to produce underwater pressure profiles that may be conducive for applications in cellular transfection and drug delivery.