Asymptotically self-similar flows are scarred for life: early injuries in problems of shock reflection and refraction

With the neglect of viscous effects and the corresponding dissipation length and time scales, problems of shock dynamics are self-similar.   Simple magnification of the length scales of observation can be obtained at correspondingly scaled evolution times.

In reality, such problems are never self-similar at a young age.  Characteristic length scales exist in these problems, often at the smallest scales (boundary layers, shear layers, shock structure, etc...).

Our numerical experiments address how the introduction of small characteristic length scales affect the asymptotically self-similar solution at much later times.

We pose the question:


How does an early injury of the self-similar regime affect the solution at later times?

Our recent paper with Shem Lau-Chapdelaine, based on his undergraduate thesis, addresses this problem for shock reflections and the form of reflection pattern.  Consider the following problem, illustrated in the Figure below: 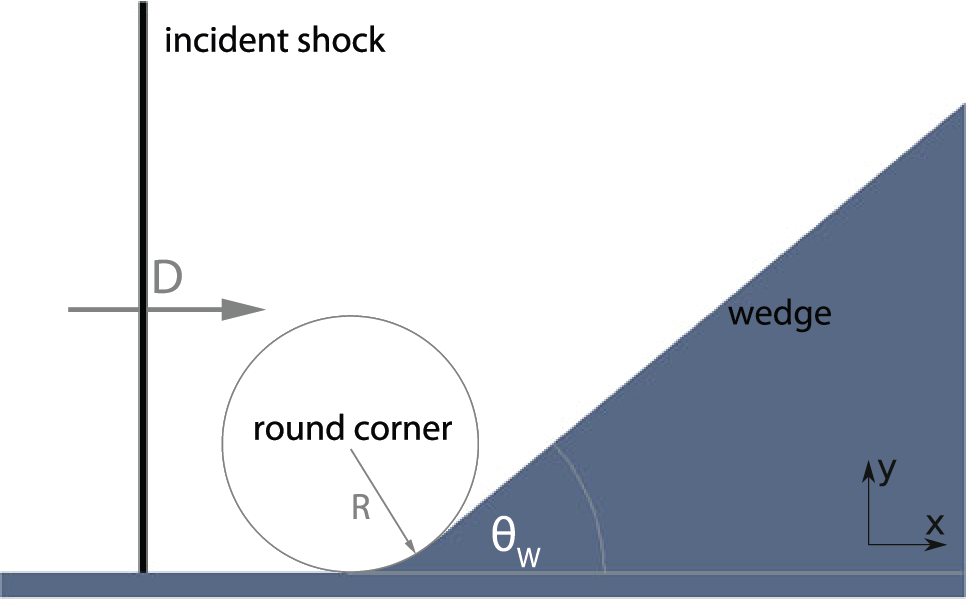 A shock reflects over a ramp.  Only the corner of the ramp is not straight, but has a radius of curvature.  We are interested at the flow field established by this ramp in the far field, once the initial radius of curvature becomes negligibly small compared with the evolution length scale.

It turns out that an initial, negligibly small, but finite radius of curvature completely modifies the flow field.  For example, a M = 6.6 shock reflecting over the ramp in a gas with γ = 1.2 transits from regular to an irregular reflection at an angle of 45°.

The transition for the same shock over an initially curved corner of negligible radius of curvature occurs at a ramp angle of 58°.

Another example where the early injury may modify the structure of a self-similar problem is the shock diffraction over a compressive corner.  For a sharp corner, the diffraction of the shock leads to something like this:

If we now introduce an initially curved corner, the solution obtained in the far field is again completely modified.

The expansion fan associated with the corner terminates by a shock wave.  The flow negotiating the corner overexpands and is re-compressed by this shock.  The expansion is not perfect, and we expect the usual complications of pressure wave oscillations of over-expanded jets.

Note that the corner has the initial same effect as a local velocity deficit along the horizontal wall due to wall boundary layers, if viscous effects were to be accounted for in that region.