Logan presented his study on the structure of supersonic turbulent deflagrations and DDT.  Strong pressure waves are driven by the rapid ignition of hot-spots.  The driven hydrodynamic instabilities along shear layers permit to rapidly burn the gases.
Very similar to self-sustained detonations, just slower.

The session was closed by a panel discussion on DDT.  The concept of self-turbulization of the flame came out as the outstanding theme for future research. 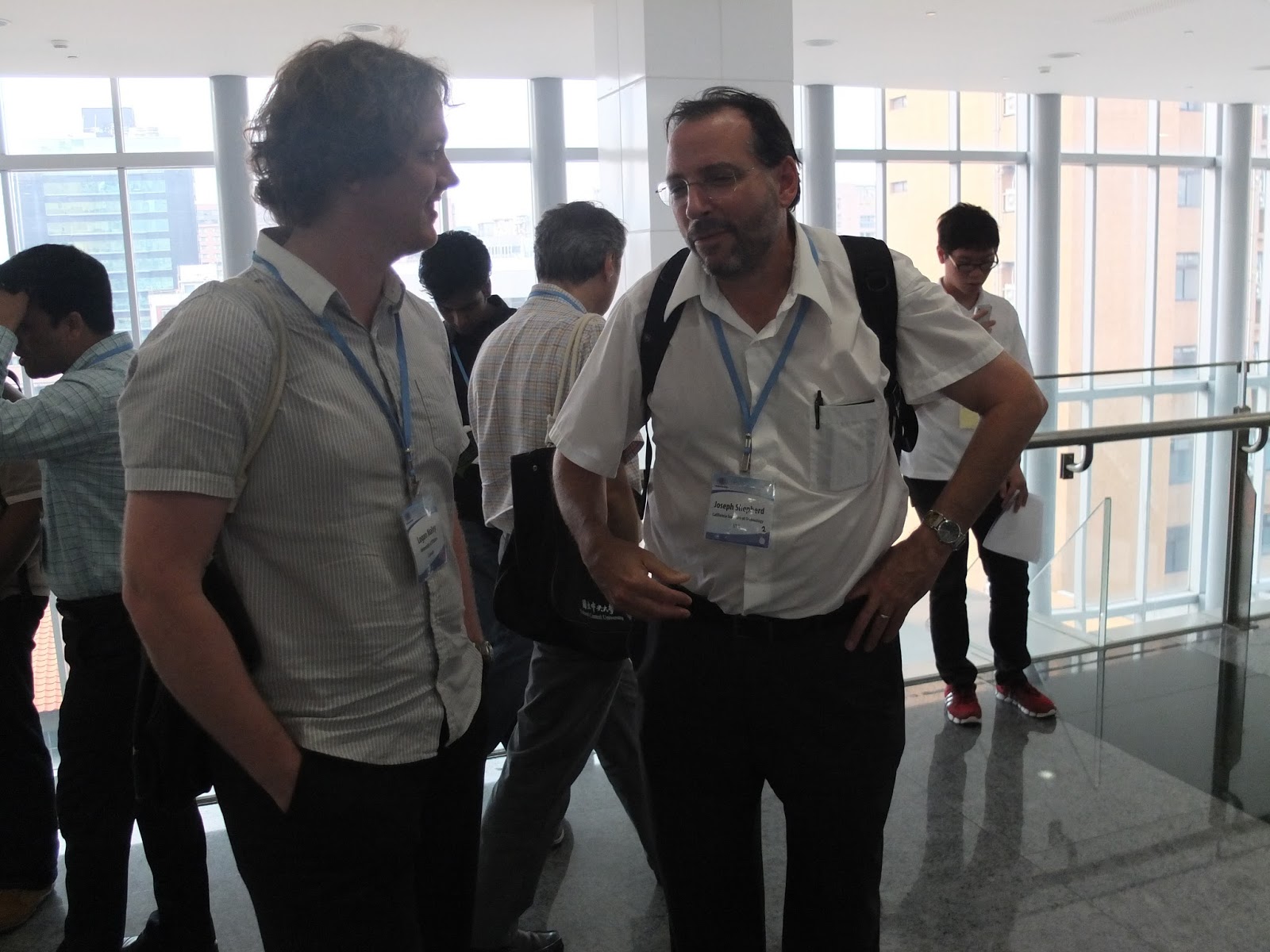 Hesam presented his thesis work on the flame speed in bi-metallic mixtures. Also keen to have met Professor Forman Williams, author of the book that disappeared from my shelves for 1 year. 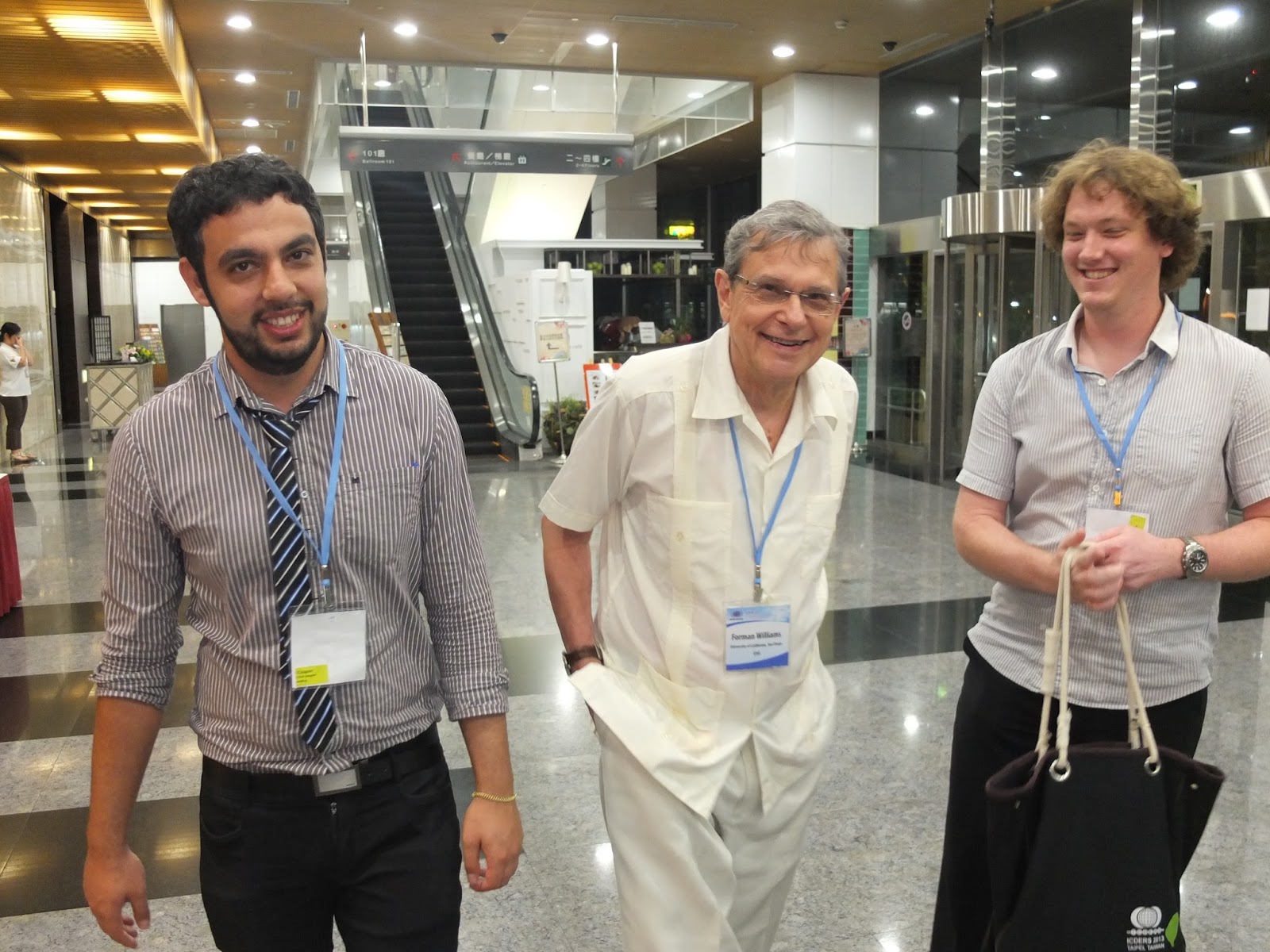 Maha on a flame database and non-homogeneous deflagrations

While Maha presented two Work-in-Progress posters.  The first is on a Flame Speed dynamic database, soon to become online.  The second on deflagrations in non-homogenous mixtures, visualized by our large scale shadowgraphy technique of Settles.


Matei on the Fickett model with 2 sonic points

I presented a theoretical study on detonations with multiple peaks in the rate of energy release and a loss.  Such systems may have multiple embedded sonic points in their steady structures.  Only the solution with the highest detonation speed eigenvalue is realizable, as the solution with the lower speeds develop a singularity behind the sonic point - signalling shock formation.   Closed form analytical solutions were obtained using the Fickett analog.

Justin Tang and Shem Lau-Chapdelaine also integrated the unsteady equations for the two sequential reactions with loss, to illustrate how the preferred steady solution is established. Consider a piston initiated detonation. The unsteady simulations below illustrate the interesting dynamics of the initiation process.

Let's place ourselves first in the frame of reference of the lowest detonation speed eigenvalue. A quasi-steady structure is established with the corresponding limiting characteristic A, corresponding to the balance between losses and the fast reaction A.

Pressure waves amplified by the second reaction amplify and coalesce into a shock.  The shock eventually penetrates the quasi-steady structure A.  Reactions B now communicate with the leading front, and the steady solution B is established with its corresponding limiting characteristic. 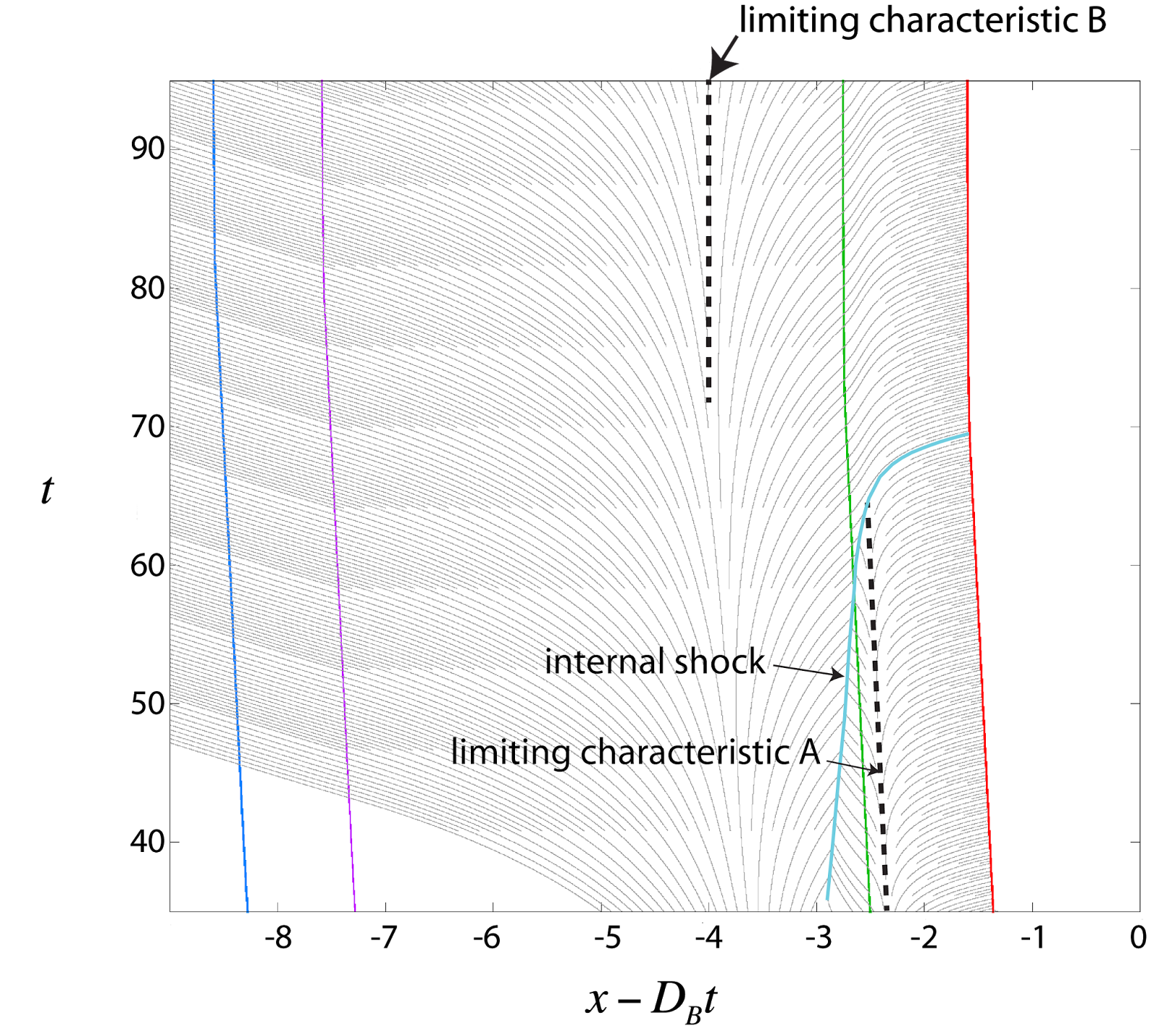 The technical session had other interesting talks by Luiz Faria from KAUST on the direct initiation of curved detonations in the frame-work of the Majda-Rosales detonation analogue, the sibling of the Fickett model. 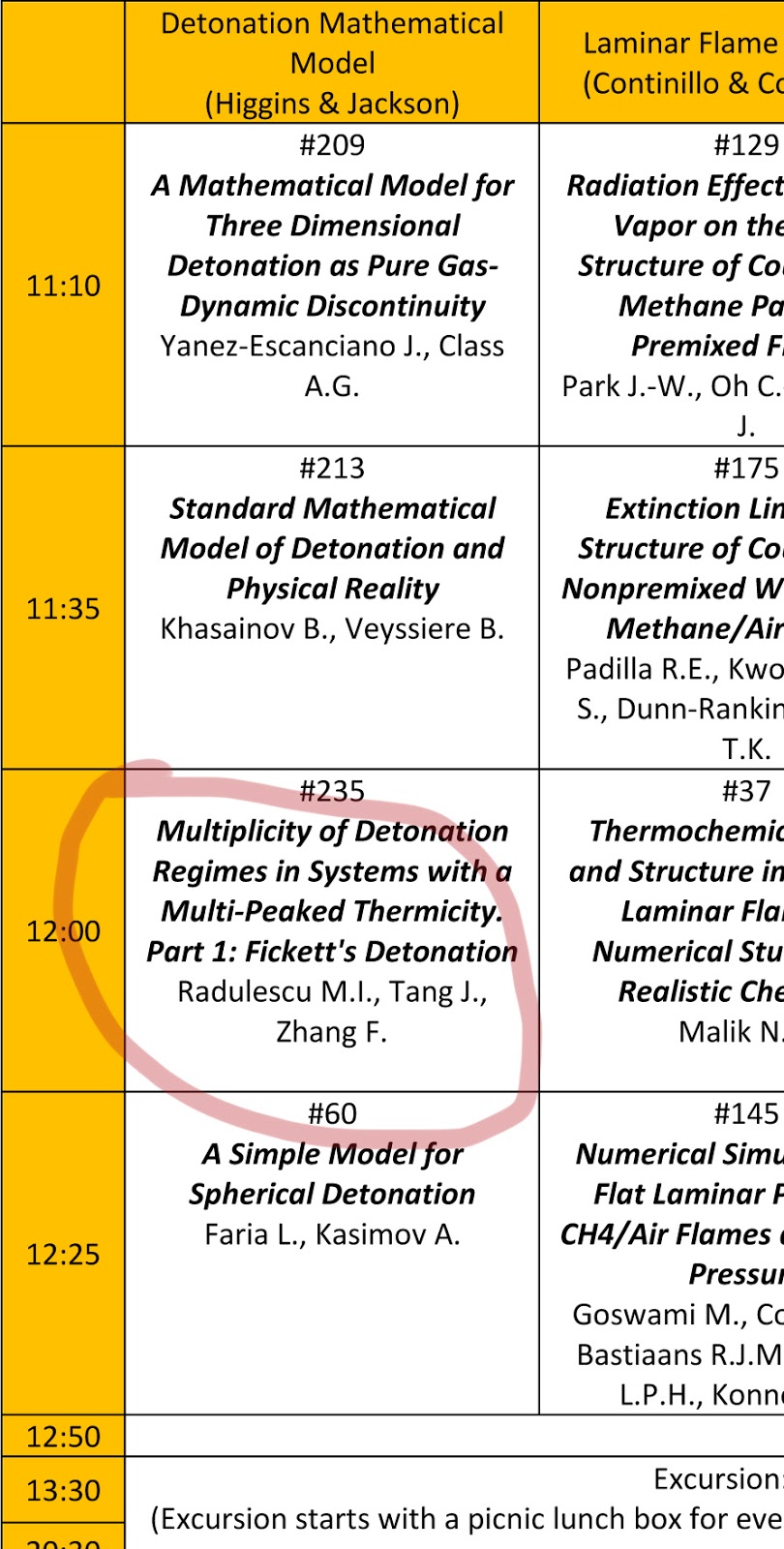 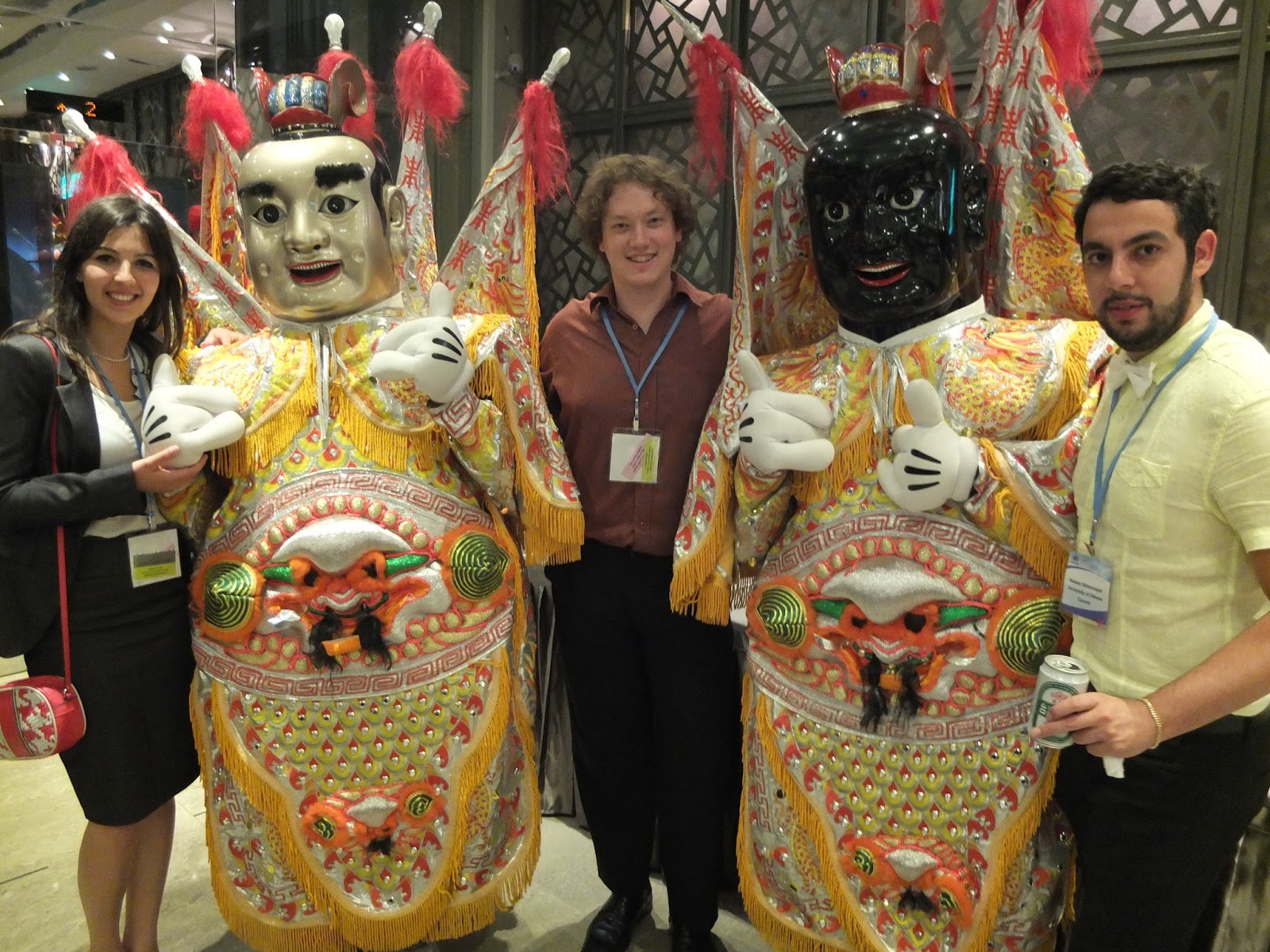 Andrew Higgins and Jenny Chao joined for a duet karaoke on Queen's Bohemian Rhapsody, for which I joined them to form the non-official Canadian delegation. 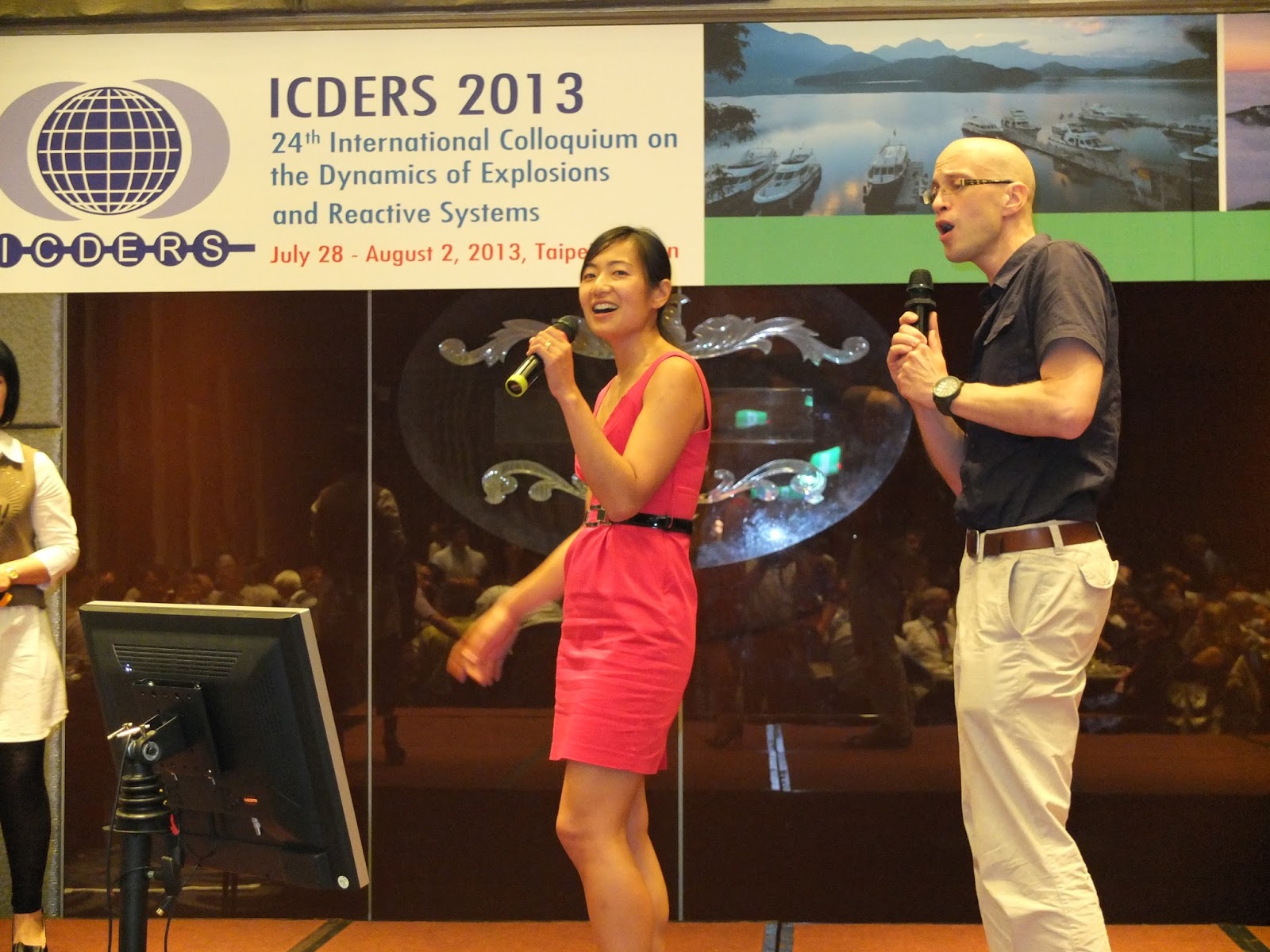 followed closely by the Russian delegation masterfully conducted by Markov... 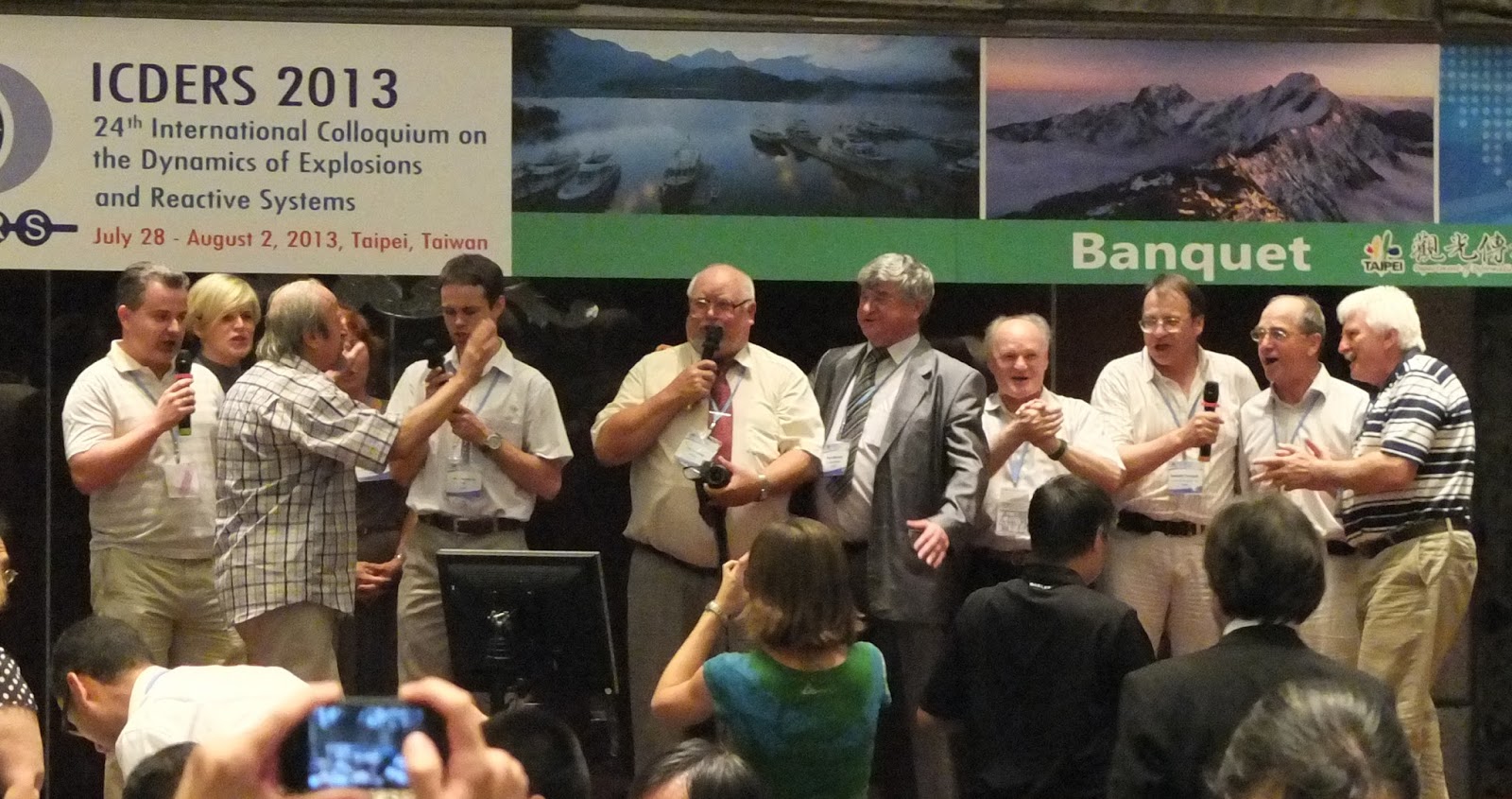 the French, joined by Maha... 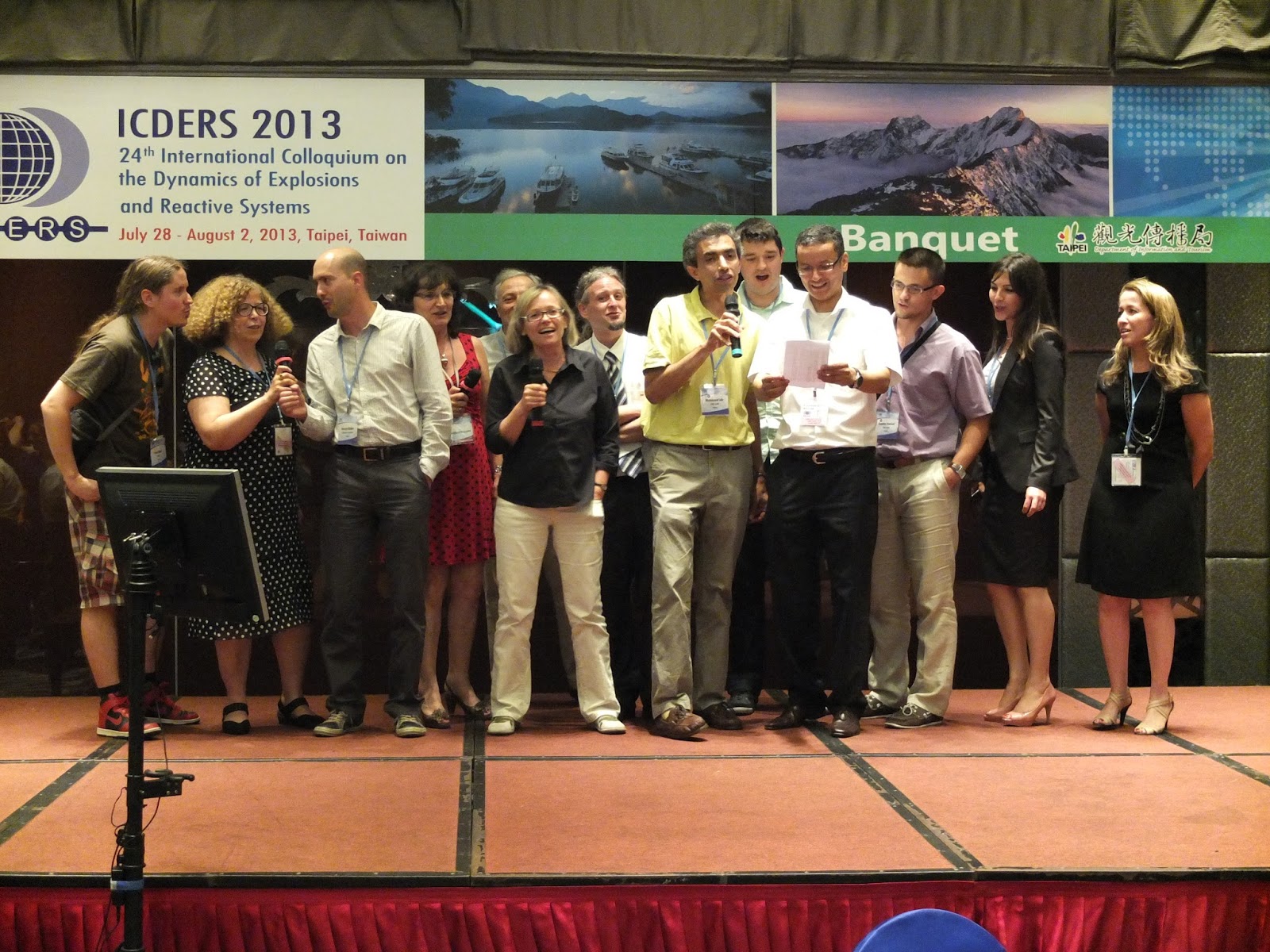 and the Italians, lead in crooning style by Gaetano Continillo. 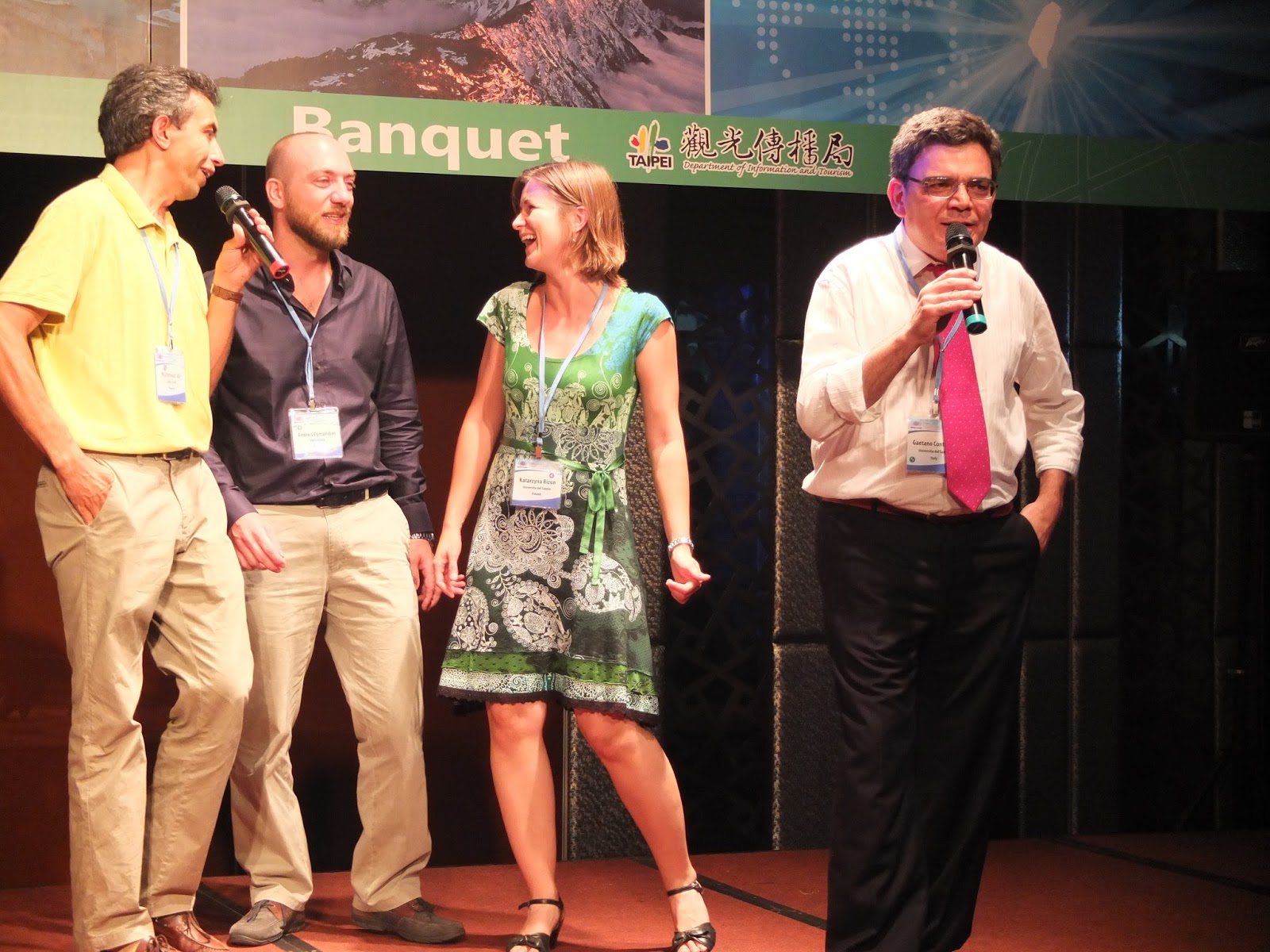 Taking in the sights of Taipei 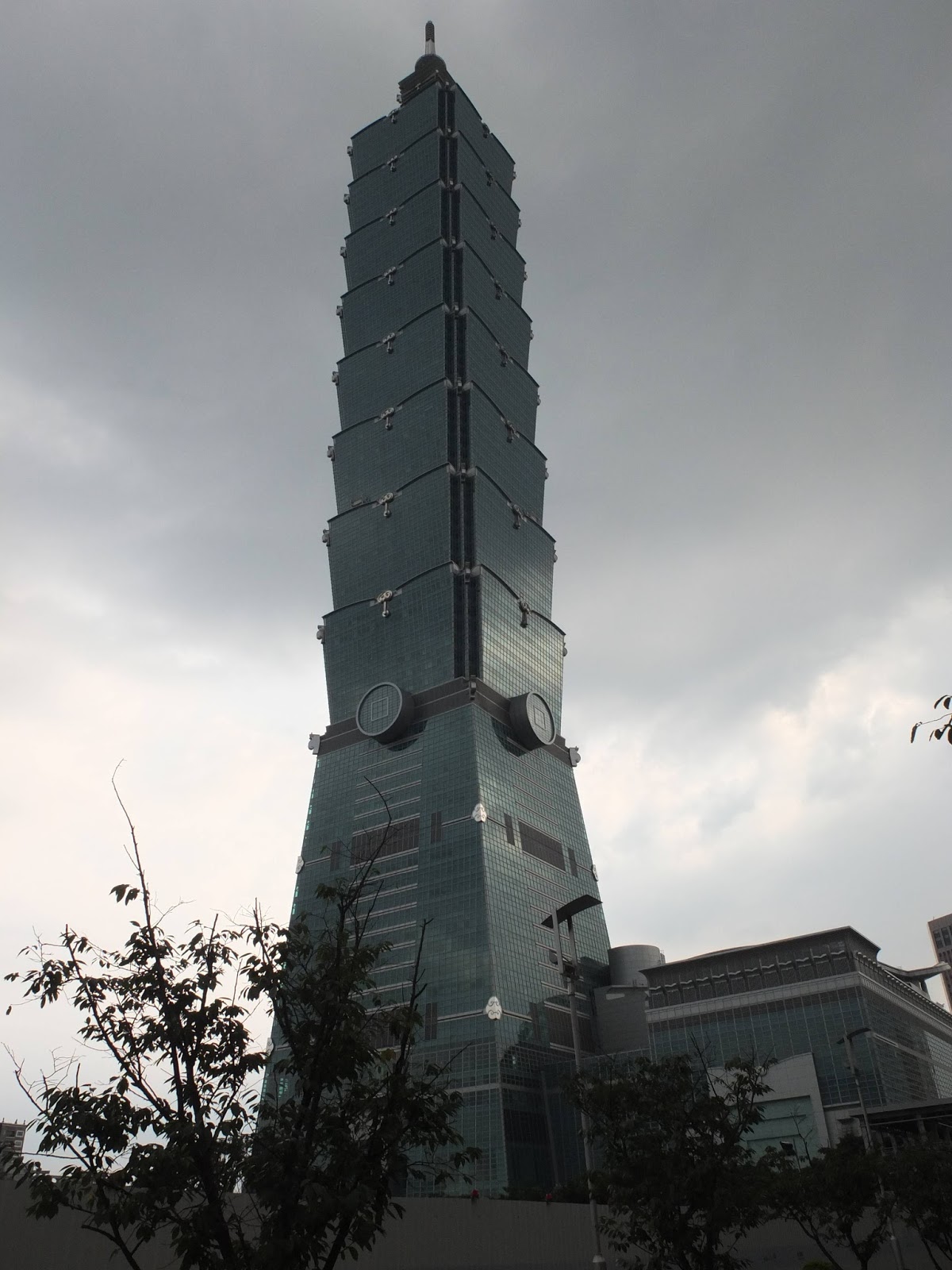